...of a Mafia Don who loves an actress who loves a writer who years later wrote about the night when the Don proposed and had a really quite bad accident just before his mother came around to dinner.

Having been stuck for years in development hell with blockbuster movie projects struggling to be greenlit, writer David Hofberg and partner Stacey Haber asked themselves the question, What resources do we have to hand and what can we write and produce ourselves? The answer became The Man From Verona.

A black comedy with an affectionate nod to Hitchcock, it made its New York debut Off-Off-Broadway on 20 July 1995, directed by David, produced by Stacey and starring improv legend Silver Saundors Friedman and Rick Petrucelli (The Godfather, Annie Hall). 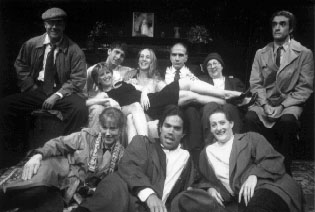 Almost 18 years later, on 4 February 2013, it made its London debut at the Greenwich Theatre in a production by Vertical Line Theatre.

In August 2019, it made its Edinburgh debut at the Fringe Festival, which led to its return to London at The Other Palace Theatre in January 2020.